The Splintered Soul in "Black Swan"

Black Swan is an intensely delirious movie that charts a girl’s descent into dark territory.

Leroy has doubts. He thinks Nina has the perfect technique to be the White Swan, but she is stiff and cold- sexless to be the Black Swan. What follows is Nina’s struggle to be perfect as well for the Black Swan role.

Nina’s interior life resembles Rapunzel’s: She is locked up in the tower by an overbearing Mother Gothel (Barbara Hershey as Erica). They live together, and clearly, Erica supports Nina’s ambitions and dotes on her. But maybe too much: Erica wakes her, feeds her, undresses and dresses her, even taking Nina’s earrings out herself.

Consider an early scene in which Nina talks about having a dream. At first, we assume that she is talking to her mother. Much later, we realize she may have been talking to herself. This is what she does when she is by her lonesome. In the hallways of the theater, she is all by herself many times, even as girls her age talk and laugh among themselves.

In another early scene, mother and daughter regard a fruit. “How pretty,” they say; talking like children. Nina’s bedroom is full of stuffed toys- designed like a child’s room.

Hershey convincingly plays a mother who is by turns sweet and suffocating, jealous and protective. Erica used to be a ballerina herself and while she wants her daughter to realize her dreams, she admits at one point that she thought her daughter cannot handle the pressure. She is also aware that her daughter is unstable, so she wishes Nina would stop harming herself. A nail-clipping scene that will dare you to look away would show how shockingly involved Erica is, and how layered this involvement is. In another scene, Erica urges Nina to have a little cake after Nina cops the plum role. Subsequently, Erica demonstrates how forceful she is whether she wields a knife or a nail clipper. 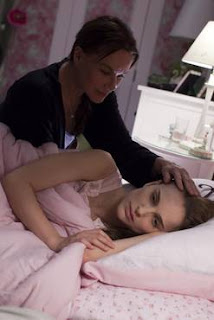 Black Swan’s first crucial plot point is a trade common in fairy tales: a bargain that will cost you. Nina will get to play the Swan Queen if she can show Leroy how to play the Black Swan.

True to the Swan Lake story, Nina (the princess) finds herself tapped by the artistic director (the prince), thereby getting the happiness she seeks. However, she finds the Black Swan role a burden (the curse) because she does not know how to seduce the audience. Her mother (the sorceress) has cloistered her, and therefore crippled her. Lily, another member of the troupe (another swan, Odile from the source) who exudes the wildness and the passion required, threatens to ensnare the director and usurp the Swan Queen role.

Is Lily out to get her? Black Swan toys with us by blurring the lines between the real and the fantastic. It plays in line with the traditions of psychological horror fiction (The Turn of the Screw, The Innocents, The Others), in which the ghost may or may not be imagined, and the virginal heroine is repressed and possibly unhinged.

Aronofsky also achieves his effects through various strategies. He uses mirrors and hallways and doubles to suggest an identity crisis, the anxiety it brings and a need to deal with it. These characterize free choice and an opportunity to learn and grow. In many scenes, mirrors force Nina to look at who she really is. Hallways represent a period of transition, a journey into the unknown. Additionally, the camera constantly moves and swirls, to indicate that Nina's personality is in flux.

Plus Nina has doubles in her mother, Beth and Lily.

The casting of Ryder, Portman and Kunis is inspired: Ryder as the aging star forced to retire, Portman as the star of the moment and Kunis as the ascendant star. Just like her character, Portman reaches for greatness, and achieves it.

Early in the movie, Leroy recounts the story: A sweet girl finds herself cursed to be a swan, and only true love can set her free. Before a prince can declare his love, the black swan tricks him and seduces him. The white swan kills herself and finds freedom in death.

In the middle of the movie, Nina meets her self- her alter ego, the shadow- in an alley. We know from literary history that meeting your doppelganger is a sure omen of death. Does she die in the end? We cannot say conclusively, but she definitely dies a glorious, symbolic death. She has to accept her shadow- to be uninhibited, to wake up to her flaws, to become a woman.

Black Swan succeeds in exploring parts of Nina’s personality that have been suppressed, and her disintegration after attempting to embody both swans.

Posted by lightning catcher at 6:37 PM

Email ThisBlogThis!Share to TwitterShare to FacebookShare to Pinterest
Labels: viewed and reviewed